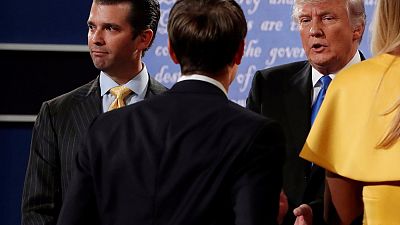 Donald Trump Jr claims he did not tell his father about his meeting with a Russian lawyer last year. It’s a denial central to the current political storm.

Reaction to Trump Jr’s email chain showing him keen to accept “sensitive information” on Hillary Clinton from a Russian national has been swift from all sides.

But even some Republicans such as Senator Lindsay Graham of South Carolina now want to see Trump jr questioned by the House intelligence committee over possible collusion between Russia and the 2016 Trump presidential campaign team.

“There is no evidence yet that the Russians did help them, but that requires further inquiry, but the fact that we are knowing this now, in July, really is disturbing. I mean whatever they got about Russia they need to get out.”

“Between these revelations and the president’s horrendous handling of the meeting with Mr. Putin, it’s clear that Congress needs to step in and sanction Russia and be a roadblock to lifting sanctions because clearly the president will not be tough with Mr. Putin as he should be.”

Trump Jr. met lawyer Natalia Veselnitskaya, on June 9, 2016, after an email exchange with an intermediary.

The emails, tweeted by Trump Jr. on Tuesday, could provide material for Special Counsel Robert Mueller’s probe into possible collusion between the Trump campaign and Russia during the 2016 presidential election.

In one of the emails dated June 3, 2016, Trump Jr. wrote: “If it’s what you say I love it.” He released the tweets after the New York Times said it planned to write about their contents and sought his comment.

Trump Jr. said in his tweets that nothing came of the meeting. Veselnitskaya told NBC News early on Tuesday she was not affiliated with the Russian government and had passed no information.

Meanwhile President Trump has continued to deny any collusion and President Putin has denied any interference. Critics may be rubbing their hands in anticipation but lawyers for the son hope the saga can be put down to just a demonstration of political inexperience.