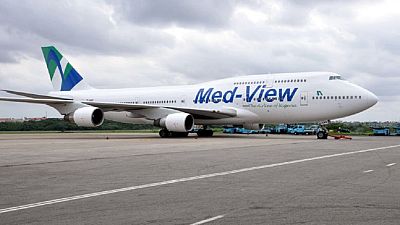 Nigerian authorities have launched an investigation into claims that a teenager survived 12 hours hidden in the wheel compartment of a plane between Lagos and London, an aviation official said Wednesday.

The boy, said to be aged 15 or under, was apparently discovered in the wheel compartment of a Med-View Airline Boeing 747 which made the round trip last Saturday.

“We are looking into the incident to find how it happened and to prevent a recurrence,” Sam Adurogboye, of the Nigerian Civil Aviation Authority (NCAA), told AFP.

Adurogboye said the authorities were “disturbed by the incident because of its implications for air safety”.

Hypoxia or oxygen deficiency normally sets in from about 10,000 feet and would quickly render a person unconscious.

But there have been previous examples of stowaways surviving in the wheel compartment of passenger jets.

An October 1996 report by the US Federal Aviation Administration, “Survival at High Altitudes: Wheel-Well Passengers”, documents five survivors between 1947 and 1993.

Three of them were teenagers, one aged 13 and two aged 17.

In April 2014, the US Federal Bureau of Investigation said a 16-year-old boy survived a five-and-a-half hour flight from California to Hawaii at altitudes of up to 38,000 feet.

In October 2007, a 27-year-old man was charged with entering Singapore without a valid pass or permit, after stowing away on a 35-minute flight from Kuala Lumpur.

Harsh social and economic conditions in Nigeria are forcing many people to undergo risky journeys searching for greener pastures in Europe and the United States.

In March last year the body of a stowaway was discovered in the undercarriage of an Arik Air jet flying from Lagos to New York.

Another body was found on an Arik Air flight from Lagos when it landed in Johannesburg in November last year.