South Africa will go through with nuclear expansion plans - Zuma 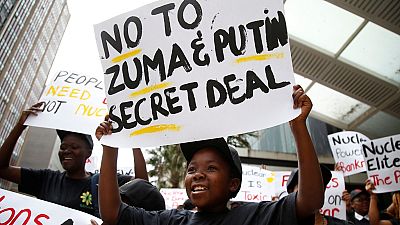 South Africa is committed to an “open, transparent” process to build new nuclear power plants and the government planned to go through with its plans for nuclear expansion, President Jacob Zuma told parliament on Thursday.

South Africa is planning to build 9,600 megawatts (MW) of nuclear capacity, a project that could be one of the world’s biggest nuclear contracts in decades.

But Energy Minister Mmamoloko Kubayi said on Wednesday in Moscow that the plans will be reviewed as the country is in a recession.

Zuma further told parliament that the economy would come out of recession “quicker than we believe”. These were his first public comments since data showed Africa’s most industrialised economy was struggling.

The country sank into recession for the first time in eight years in the first quarter, hit by weakness in consumer sectors such as wholesale, retail and accommodation.

Asked by a lawmaker why he should still be in office given the economic woes and personal scandals, Zuma said he was elected by the people.