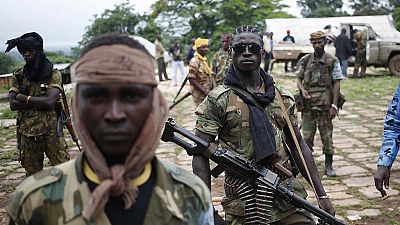 Bodies lay in the streets and at least 35 people were wounded on Tuesday in fighting in Central African Republic a day after a peace deal was signed to end years of bloodshed, aid workers and witnesses said.

Thousands have died and a fifth of Central Africans have fled their homes in the conflict that broke out after mainly Muslim Seleka rebels ousted President Francois Bozize in 2013, provoking a backlash from Christian anti-balaka militias.

Thirteen of the country’s 14 armed groups along with representatives from the government signed Monday’s accord in Rome. The deal, brokered by the Roman Catholic Sant’ Egidio peace group, called for an immediate ceasefire.

But clashes between former Seleka members and anti-balaka fighters erupted early in the morning in the town of Bria, around 580 km (360 miles) northeast of the capital Bangui.

“There are bodies strewn across the streets. There are also fires and looting of houses taking place,” said one aid worker present in the town, who asked not to be named for fear of reprisals.

An official death toll was not immediately available, but the medical charity Medecins Sans Frontieres (MSF) said it was treating those wounded in the clashes.

The presence of rival factions in Bria has made the town a regular flashpoint, including during fighting that killed around 300 people and displaced 100,000 last month.

Tuesday’s clashes broke out near a camp housing people who had been forced to flee previous bouts of violence, according to the country’s U.N. peacekeeping mission, MINUSCA.

“We regret the presence of armed elements in IDP (Internally Displaced Persons) camps, which causes problems not just in Bria but also in other locations. It’s a reality,” said MINUSCA spokesman Vladimir Monteiro.

Monday’s peace deal is only the latest in a series of agreements aimed at putting an end to the conflict in Central African Republic, which has in recent months witnessed some of the worst bloodshed in years.

The office of President Faustin-Archange Touadera, who was elected last year, applauded on Tuesday what it said was “an historic accord”. However, other reactions in the capital Bangui were less optimistic.

“(This accord) simply follows the same scenario repeated over and over,” said Joseph Bindoumi, president of the Central African League of Human Rights. “Those who signed are mocking the people.”