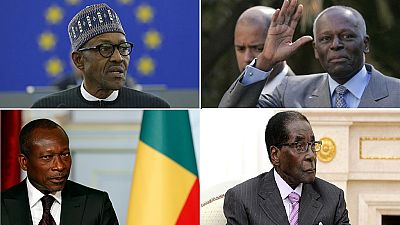 Ordinarily one would think these leaders fly out to participate in international engagements or for official visits but that is not the case in respect of those mentioned above. All four left home to seek medical treatment abroad.

What is it about the healthcare system back home that these leaders would rather seek treatment outside their respective countries?

74-year-old Muhammadu Buhari returned home in March 2017 after spending seven weeks on sick leave in the UK for an undisclosed ailment. He left Abuja on January 19 after informing the National Assembly.

He is, however, back in the UK since May 7, for ‘further medical checks,’ his wife visited him earlier this month and reported that he was doing well and fast recuperating. It is unclear when he will be returning but his Vice-President, Prof Yemi Osinbajo, continues as Acting President till then.

The last publicized medical condition he had was an ear infection for which Buhari was in the UK for treatment sometime last year. In the case of the recent ailment, the Presidency insists that its a private affair and that he was fit to continue in his role as President.

Buhari who came to power in 2015 as leader of Africa’s biggest economy and most populous nation, his recent absence has been raising fears and speculation about his ability to run the country.

A recent letter signed by 13 civil society organizations called on him to take medical leave.
As it stands now, he is on leave and is expected back to continue running affairs of the country.

Oil-rich Angola for the first time in a long while officially confirmed that longtime president, Jose Eduardo Dos Santos, was in Spain to seek medical treatment in May.

Despite leaving the country in early May, it was not until May 29, that the foreign minister confirmed the news after opposition parties heaped pressure on the government to disclose the location of the man who has led Angola since 1979.

Before the Minister’s clarification, fake news websites planted a story reporting the death of the 74-year-old, it took his daughter, Isabel Dos Santos, to debunk and chide the purveyors of such news on her social media handles.

Dos Santos steps down from power after 38-years in charge. He will continue to lead the ruling party but Joao Lourenco, Interior Minister will be on the ballot paper for the MPLA in presidential polls slated for later this year.

From Angola, we move across the southern Africa region to Zimbabwe, where the continent’s oldest leader, Robert Gabriel Mugabe, has been flying out to Singapore to seek medical attention. He has been out twice this year alone.

The government says the 93-year-old suffers from eye cataract disputing the opposition claims that Mugabe is afflicted by a cancer. At a time when he was flying out to seek treatment, major hospitals in the country were in crisis.

Some had resorted to turning away non-emergency cases, at a point doctors had embarked on strikes, some facilities had announced the suspension of surgeries citing the unavailability of medicines.

Mugabe is, however, billed to be on the ballot paper when elections are held next year. The ruling ZANU-PF picked the nonagenarian as its candidate.

Benin’s Talon and the Paris surgeries

The latest leader who stepped out for medical reasons was Patrice Talon of Benin. The presidency has opened up about his condition disclosing that the 59-year-old underwent two successful surgical operations during his recent visit to Paris.

According to a statement released on Monday (June 19), one procedure was due to doctors finding a lesion in his prostate while the second operation was in his digestive system.

His absence for close to three weeks as is the case in most African countries, raised concerns and speculation about his whereabouts.

Talon “has completely recovered” and “is fully exercising his constitutional duties,” his office said upon his return to the country on Sunday (June 18). Talon, a successful cotton businessman was elected President of Benin in March 2016.

He took over from Thomas Yayi-Boni who had served his constitutionally mandated two terms. Talon defeated the then Prime Minister, Lionel Zinsou, in second round of voting after both men led in the first round. 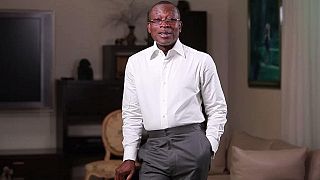 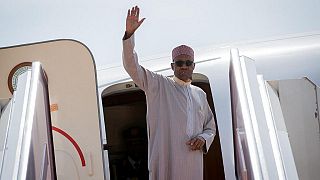 Nigerian president returns to the UK for further medical checks

Nigerian president returns to the UK for further medical checks