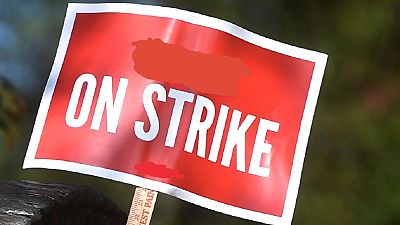 Kenyan government nurses have gone on strike over delays in an agreement that will give them pay rises, a union official said on Tuesday, bringing services to a halt in many parts of the country.

The deal was meant to have been signed by the union, the national government and county governments, but the state commission that advises on public sector pay rejected the deal, according to an official letter seen by Reuters on Tuesday.

The strike, which has led to patients being sent away from some hospitals, is a headache for both national and county governments ahead of elections in August 8.

“The nurses are fully on strike and have vowed to continue with the strike until the government signs their collective bargaining agreement(CBA),” Maurice Opetu, acting general secretary of the 26,000-member Kenya National Union of Nurses told Reuters.

“We have negotiated and agreed a collective bargaining agreement for the nurses but the government is not ready to sign it even after both parties agreed with the nurses union,” he said.

The Council of Governors, representing the counties, said it planned to challenge the government’s rejection of the deal.

“From yesterday afternoon to this morning, we had three deaths in the Emergency Department. The other three patients died in the wards,” Khadija Shikely, the county Chief Health Officer, told reporters.

In the same hospital, patients lay unattended in wards and long queues formed at the emergency section of the biggest government health facility in Kenya’s coastal region.

“For now, we only focus on the very critical cases,” a doctor at the hospital who asked not to be named because he was not authorised to speak, told Reuters at the casualty ward.

“Places like the maternity wing cannot function at all without nurses. So operations there are literally grounded,” he said, adding that they had advised mothers-to-be to seek private facilities.