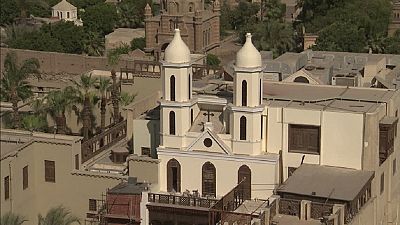 Egypt has retraced the biblical route of Jesus Christ’s family while in the North African country from Bethlehem, to promote tourism.

The three-year journey of Joseph, Mary and Jesus Christ is now being embarked on for the first time by 520 tourists who arrived in Cairo last week from 20 different countries, state news agency MENA reported.

Among the places they will visit are the Church of St. Sergius and the Hanging Church in Old Cairo, St. Mary’s Coptic Orthodox Convent in Maadi, the Church of the Blessed Virgin Mary at Jabal al-Tair near Minya, Muharraq Monastery at Mount Koskam, the Holy Virgin Mary Coptic Orthodox Monastery at Mount Durunka in Assiut governorate and the three monasteries of Wadi al-Natrun which includes the Saint Catherine’s Monastery in Sinai where it is believed to enshrine the burning bush from which God first revealed himself to Moses.

These are eight of the 25 historical sites ready for the tour, the tourism ministry said.

They are believed to be places where the holy family stopped during their stay in the North African country.

Pope Francis was in Egypt on a historic visit last month where he delivered a message of tolerance and co-existence in the face of terrorism that is affecting the tourism sector of the country.

Tourism Minister Yehia Rashed is reported to have visited Rome for talks with the Vatican on promoting tourism to Egypt as the site of Christ family’s journey in the country is being launched.

Egypt’s tourism sector has been hard hit after the political revolution in 2011 and subsequent jihadist attacks.

Mary and Joseph traveled from Nazareth to Bethlehem in 5 B.C. before the birth of Jesus Christ.

The family moved to Egypt after Joseph was told in a dream to flee to the now North African country to escape the command of Herod the Great to slaughter children in and around Bethlehem.

They reached Egypt after a 65 kilometers journey where they lived for three years until after the death of Herod in 4 B.C. when Joseph had a dream that it is safe to return to Israel.

The family traveled to Nazareth which took them a journey of at least 170 kilometers.