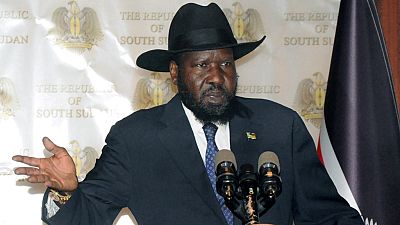 A showdown between South Sudan’s President Salva Kiir and his ousted army chief intensified on Friday after the general failed to return to the capital Juba following his dismissal amid a worsening civil war.

General Paul Malong, who has been leading Kiir’s military campaign against rebels supporting his political rival Riek Machar, left Juba with a convoy of vehicles for his home state of Aweil in the northwest on Tuesday, raising speculation over his next move.

“When I talked to him (Malong) last, he was not in a good mood, he was in a fighting mood,” Kiir told reporters on Friday. “I tried to calm him down, but he was rather wild.”

Kiir said Malong should have thanked him and formally handed over the command of the military to his successor instead of leaving the capital. Kiir wants Malong to return, but so far the general has refused.

“I have assured him (Malong) of his safety as soon as he arrives in Juba. I have given the security organisation all the necessary orders,” Kiir said.

“It is the concern of everybody and nobody wants … Malong to run into such unplanned problems. There are so many foreign hands that are now being seen behind General Paul as pushing him,” he said, alluding to unspecified foreign interference.

On Thursday, Malong said he had gone home for a rest but on Friday he refused to board a plane that was sent to fly him to the capital unless all his bodyguards accompanied him, presidential spokesperson Ateny Wek Ateny said.

“He should not have more than four bodyguards by law,” Ateny told Reuters, adding that a committee of elders from Malong’s home state has been sent to “persuade” him to come to Juba.

His sacking followed the resignations of several senior military figures who alleged that there was ethnic bias in the army and that war crimes had been committed. Some of them later vowed to topple Kiir.

South Sudan won independence from Sudan in 2011 but has been in a civil war since 2013 when Kiir, an ethnic Dinka, fired his deputy, Machar, from the rival Nuer community.

The move triggered a conflict that has pitched parts of the oil-producing country into famine, paralysed public services and forced a quarter of the population — 3 million people -= to flee their homes. The United Nations has said the violence amounts to ethnic cleansing and risks escalating into genocide.