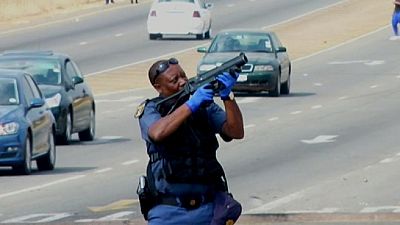 Police fired tear gas to disperse crowds in Ennerdale township, south of the economic capital, after residents blocked roads with rocks and burnt tyres. Some schools and businesses were closed due to the protests.

The government urged residents to stop violence, intimidation and looting while pushing their demands.

“The law will reign at the end of the day,” Police Minister Fikile Mbalula said on Eye Witness News service.

“What does a protest for housing got to do with people closing down shops and looting shops? It’s got nothing to do with that…its criminality.”

South Africa has been hit by sporadic demonstrations in the past few years dubbed “service delivery protests”, with residents demanding water, electricity, housing and jobs at a time the government is faced with weak economic growth.

The latest bout of protests kicked off in Ennerdale and nearby Eldorado Park townships on Monday. On Wednesday, residents of a shantytown in Laudium, west of Pretoria, held demonstrations demanding electricity be installed in their homes. The area was tense but calm on Thursday.

The ructions around Marikana are the latest flare-up in the platinum belt between poor communities and companies grappling with depressed prices and rising costs.

Marikana has particular resonance as it was the scene of the killing of 34 miners shot dead by police during a violent wildcat strike in August 20102.

The persistence of poverty and joblessness 23 years after the end of apartheid is also stoking the anger, often targeting local governments tasked with providing services many blacks were deprived of under white-minority rule.

The struggling economy grew by only 0.3 percent last year. Unemployment is at 26.5 percent and many among the black majority population still lack running water, electricity, roads and schools long after apartheid’s demise.