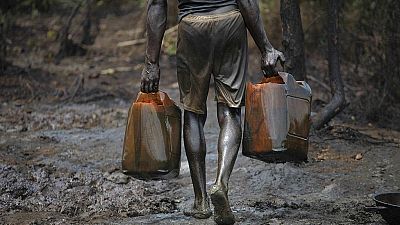 Nigeria’s President Muhammadu Buhari has approved an additional $111 million for an amnesty program for militants (Niger Delta Avengers) responsible for an uprising in the oil-rich Niger Delta region, according to a statement released by the presidency on Sunday.

NEW VISION FOR NIGER DELTA: Pres MBuhari has approved the release of an additional 35 billion Naira for the Niger Delta Amnesty Programme.

According to Vice President Yemi Osinbajo’s media aide, Laolu Akande, the additional funds will be used used to fund “monthly amnesty stipends, as well as reintegration activities, and training and employment schemes.”

.MBuhari The additional funds will go into payment of monthly Amnesty Stipends,as well as Reintegration activities, and Training & Employment Schemes

NewsWeek reports that the Nigerian government began paying into an amnesty program in 2009 to tackle violence in the Niger Delta, in the country’s southeast, where militant groups opposed to the presence of foreign oil companies in Nigeria and calling for redistribution of the region’s oil wealth have attacked oil facilities. Among these, the Niger Delta Avengers (NDA) group has claimed responsibility for most of the attacks in 2016.

It further reports that attacks on oil pipelines have severely impacted Nigeria’s oil production; some companies have halted production in the region and the country’s oil output fell around 700,000 barrels per day (bpd) to around 1.5 million bpd for several months in 2016. However, Maikanti Baru, head of the Nigerian National Petroleum Corporation, said earlier in May the country is now producing 2 million barrels per day.

Under the 2009 amnesty programme, each former militant is entitled to 65,000 naira a month plus job training. But in March a special adviser to Nigeria’s president said the programme was facing a cash crunch, Reuters Africa reports.

“Currently the Amnesty Office has now paid up all ex-militants backlog of their stipends up to the end of 2016,” the presidency said in a statement.

The government has been holding talks with militants to end the attacks that cut Nigeria’s output by 700,000 barrels a day (bpd) for several months last year, reducing total production at that time to about 1.2 million bpd. It has since rebounded.

The presidency also said all promises made by Vice President Yemi Osinbajo on recent visits of the Niger Delta to boost development would be kept.

The damage from attacks on Nigeria’s oil industry has exacerbated a downturn in Africa’s largest economy, which slipped into recession in 2016 for the first time in 25 years, largely due to low oil prices.

Crude oil sales make up around two-thirds of government revenue.