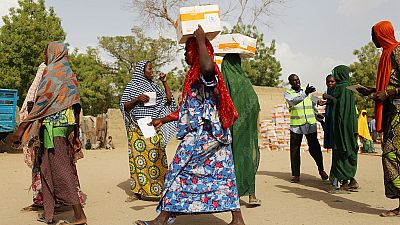 Two Nigerian officials were sentenced to two years in jail on Thursday for taking and selling about 300 bags of rice meant for people fleeing severe food shortages and fighting.

The pair were also ordered to pay 1 million naira ($3,280) each to northeastern Borno State for diverting the food that the court heard had been donated by an international aid group.

Around 4.7 million people need rations to survive in Nigeria’s northeast, according to the World Food Programme (WFP), where around 2 million have fled an insurgency that militant group Boko Haram is waging.

The convictions of Umar Ibrahim, a counsellor for agriculture, and Bulama Ali Zangebe, a member of a camp feeding committee, were the first documented in relation to graft with aid since the insurgency began in 2009.

They admitted to the High Court in the Borno state capital Maiduguri having sold rice bags for 8,500 naira each in the town of Mafa, home to a camp for displaced people.

They said they had acted on the orders of the head of the local government, who took 8,000 naira per bag. He is believed to have absconded.

The rice was donated by the Norwegian Refugee Agency, court officials said.