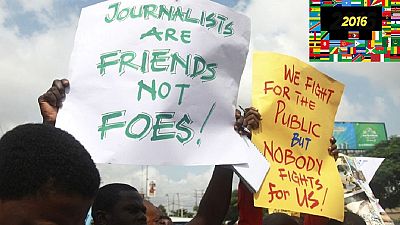 It wasn’t all rosy for journalists and media organisations in Africa in 2016. Some died while others excelled. Some were attacked and others arrested.

Africanews covered it all starting from the pan-African media channel’s online launch in January and the launch of the television later in the year.

It didn’t start well in Nigeria where the head of the Nigerian Broadcasting Commission (NBC) was arrested for fraud. It got worse in Guinea where a journalist was shot dead at an opposition meeting.

A RFI correspondent arrested since July 2015 for suspected links with Boko Haram was charged with terrorism in a military court.

Egypt sentenced a TV presenter for libel against a sexual assault victim on air, and later sentenced a blogger to three years in prison after suspending a TV show on which he alleged that married Egyptian women cheat on their spouses.

In Ivory Coast, the director of the national television was suspended for not covering the deadly Grand Bassam attack.

It got worse during the election period in Congo and Chad where some journalists were attacked and others prevented from covering the process.

A Gambian journalist standing trial for sedition escaped from a hospital where he was receiving treatment after he had been in jail since June last year.

The media in Egypt were shocked by the police who stormed their union office building and arrested some journalists for inciting protests. Uganda also banned live coverage of any protest against President Yoweri Museveni’s reelection.

It was shocking in Somalia where a young female journalist was killed in the street. This was followed by the killing of another popular radio journalist some months later by unknown gunmen.

It wasn’t fatal in South Africa but very intense after the country’s public broadcaster came under fire for issuing a notice against coverage of protests.

Two top Zambian newspaper editors were arrested for allegedly defaulting in tax payment after their media was shut down a week earlier. In Guinea, a journalist was assaulted by presidential guards while covering President Alpha Condé‘s meeting at the ruling party offices.

A Mauritanian journalist was sentenced to 3 years in prison for throwing a shoe at a minister after calling him a liar, while in Ghana, the Supreme Court jailed two radio panelists and a presenter for threatening judges on air.

A Burundian journalist disappeared after an alleged arrest while another journalist in the country was named the 2016 Peter Mackler Award recipient for his commitment to asserting the right to air his stories where independent media is under threat.

Zambia closed down three media outlets for posing risk to national peace and stability while in Gabon, independent television channels were attacked during the elections.

Nigerian army arrested a journalist for having links with Boko Haram, while in kenya, journalists demonstrated against attacks and assault on reporters while on duty.

Somalian authorities came under fire after they detained an Al Jazeera journalist while on an assignment. Journalists were also arrested in Gabon after the police raided their office.

The media was affected during the Democratic Republic of Congo’s anti-Kabila protests as RFI and Radio Okapi signals were jammed. Two Congolese journalists were also arrested after airing opposition leader Moise Katumbi’s interview.

Also in South Sudan, a 28-second audio of opposition leader Riek Machar resulted in the shutdown of a private radio station.

While a journalist was jailed in Ethiopia for defaming the Orthodox Church clergy, Gambia’s press union called for the release of three journalists arrested by the authorities.

The killing of journalists xas felt in Congo when a state television reporter was shot dead at his home. In Egypt, the press union president and two others were sentenced to two years in prison for harbouring fugitives.

Anglophone journalists in Cameroon hit back at government against censorship during protests in the two anglophone regions of the country.

At the end of the year, Egypt arrested an Al-Jazeera journalist and charged him with involvement to overthrow the government. Sudanese media also protested against confiscation of newspaper copies by authorities resulting in financial losses.