Who is Papa Wemba? 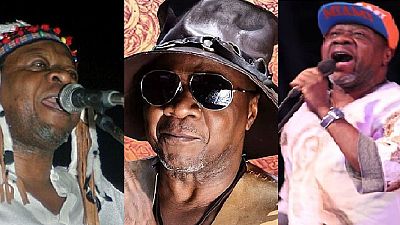 Born Shungu Wembadio Pene Kikumba on June 14, 1949 in Lubefu in the Democratic Republic of Congo, Papa Wemba is the first child of his parents.

His World War Two veteran father, who later became a hunter when Papa Wemba was born, did not want him to follow the path of his mother who was a professional dirge singer and also the one who introduced him to music.

Like many other musicians, Papa Wemba started singing in the choir of a Roman Catholic Church till 1960 when he followed the path of many young people during Congo’s independence. He started composing music and singing professionally.

Papa Wemba first joined the Zaiko Langa Langa band in Kinshasa in 1969 when he adopted the name Jules Presley for his love of rock music. Their hits included several songs written by Wemba such as Pauline, C’est la Vérité, Chouchouna and Liwa Ya Somo.

His success in mixing African traditional music and rock which was collectively called rock-rumba, led him to co-found Isifi Lokole band in 1974 with other members of Zaiko Langa Langa.

As the first child of his mother, who died in 1973, Shungu Wembadio assumed the name Papa Wemba in 1975 with Papa connoting his status as the first-born and the bread-winner of his family since his father was also deceased in 1966.

The group Isifi Lokole lasted for only a year with a single Amazone and then entered Yoka Lokole band which was also founded by Papa Wemba and some members of the collapsed group.

The woes of Papa Wemba worsened with Yoka Lokole after a year of controversies over money and position. After the troubles and seeming abandonment by the band, Wemba formed the new group Viva la Musica in 1977. The band flourished over a year with hits including Moku Nyon Nyon, Nyekesse Migue’l, and Cou Cou Dindon.

Popular Congolese musician Koffi Olomide was part of this band that promoted the vision of Wemba to gather young talented artistes to create a community of musicians.

To capture an European following, Wemba relocated to France in 1979 and joined Tabu Ley Rochereau’s group, Afrisa International. In the early 1980s, he formed a second version of Viva la Musica in Paris with a more westernized look and feel while the original band continued to perform indigenous-based music.

Papa Wemba used his Matonge family home as a gathering for fashionable youth naming it Village Molokai. In 1979, he became the unofficial leader of the Société des Ambianceurs et des Personnes d‘Élégance (SAPE) which is a society of fashionable and elegant people.

He was very stylish and always wore designer clothing. A typical rumba show always had Papa Wemba in either trendy suits with well-tailored jackets and rich in colours. Papa Wemba always made his shows a fashion event as he is a man of style and taste.

Brush with the Law

Papa Wemba was arrested and briefly imprisoned in 1976 for allegedly sleeping with a Congolese army general’s daughter. This had an impact on his life and the band he had helped create at the time.

In February 2003, he was also arrested in Paris for smuggling hundreds of illegal immigrants from the DRC to Europe disguised as band members. He was released on bail after 3 months in jail inspiring the songs Somo Trop and Numeri d’ecrou.

Papa Wemba, according to the BBC, was again convicted in Belgium in 2012 for people smuggling. He was issued a fine and a suspended sentence.

Wemba on the Silver Screens

The King of Rumba was also fit for the screens as he played a major role in 1987 Congolese film La Vie est Belle. Papa Wemba featured in many other films and documentaries with the most recent being the 2012 cameo role in Belgian film Kinshasa Kids.

Papa Wemba won a Kora Award for best artist at the first All Africa Music Awards ceremony in 1996. In 1987, his movie La Vie est Belle won the Georges Delerue prize at the Ghent International Film Festival.

Papa Wemba was well promoted for the Festival des Musiques Urbaines d’Anoumabo (Femua) concert held in Abidjan on April, 24, 2016, little did he know that it was the end of his journey in the world.

Africa mourns the legendary musician #Papa #Wemba who died today. Which of his songs do you cherish the most? https://t.co/qijrmxLPNL

The The 66-year-old musician, during a performance, collapsed on stage and died some minutes later that Sunday morning.

A memorial service was held in his honour in Ivory Coast 3 days after his death before his body was flown to the Democratic Republic of Congo. His wife Mama-Marie Lozolo Amazone, whom he married since 1970, was present for the memorial in Abidjan. They had six children.

Papa Wemba was posthumously conferred the highest national honor of the Democratic Republic of Congo after his body was returned to his birth country for his burial on May 4, 2016.

Papa #Wemba’s body in #Kinshasa ahead of Tuesday burial https://t.co/719PgkAM5N