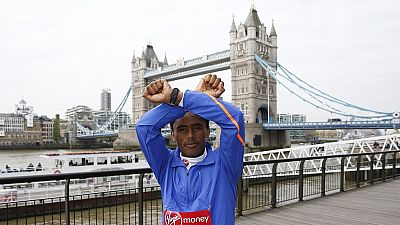 “How can i regret (it)? I come from the people. My people are (still) dying. The blood is flowing,” this was the response of Feyisa Lilesa – the exiled Ethiopian athlete who is in London for the London Marathon which takes place on Sunday.

In an interview earlier this week with BBC Sport, the Oromo activist who shot to fame in the last Olympic Games in Rio says he will continue to protest against killings of people in the Oromia region in his country.

He has rejected all talks of returning to Ethiopia citing the reason that he stands to be arrested and jailed, barred from leaving (even killed) for returning to the country. The government had assured that he will be welcomed back home as a hero having won silver in Brazil but Feyisa sought and received asylum in the United States after leaving Rio.

How can i regret (it)? I come from the people. My people are (still) dying. The blood is flowing.

He made an anti-government gesture at the end of his track event – the men’s Olympic marathon. He crossed his arms above his head as he finished the event as a protest against the Ethiopian government’s crackdown on political dissent.

Ethiopia recently extended a six-month state-of-emergency imposed last year to help quell anti-government protests in the Amhara and Oromia regions. The protests have led to mass arrests of political opposition and hundreds of people are said to have died in the security clampdown.

The London Marathon is a long-distance running event held in London, United Kingdom, it forms part of the World Marathon Majors. The event was first run on 29 March 1981 and has been held in the spring of every year since – this year’s takes place on Sunday April 23, 2017. 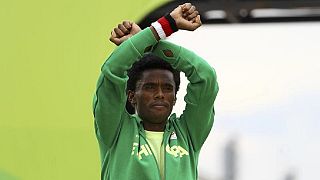