Somali national stadium still a military base, CAF President to the rescue 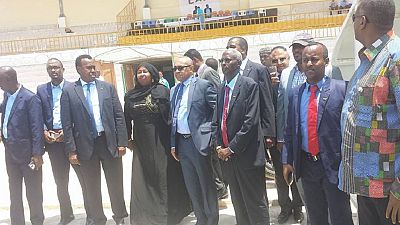 The new President of the Confederation of African Football (CAF) Ahmed Ahmed arrived in Somalia’s capital Mogadishu on Monday for an official visit to the country.

He was received by the Somali Football Association President Abdiqani Said Arab and other government officials ahead of his meeting with Prime Minister Hassan Ali Kheyre.

High on the agenda of the Malagasy football administrator is the request to free the Somali National Stadium from military occupancy after several failed attempts by the Somali Football Association.

CAF President #Ahmad Ahmad Arrives to #Somalia and he visited #Mogadishu football Stadiums, he said: we will rebuild all the Venues pic.twitter.com/AxPxZ3c1Wr

The 70,000-capacity stadium in Mogadishu has been occupied by the African Union Mission in Somalia (AMISOM) since 2011, preventing any sporting activity.

#AMSIOM rejects CAF president & #Somalia‘s minister of sports & youth to visit #Mogadishu stadium, but finally, they got access to enter in. pic.twitter.com/DxTO7JvSR7

Ahmed’s one-day official visit to the country is the first by a highest ranking CAF official. He will be visiting Somalia’s three main stadiums.

He will also address members of the Somali national team who are currently training ahead of their clash with South Sudan in Djibouti for the preliminary round of African Nations championship qualifiers.