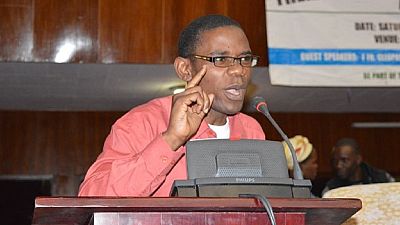 Leader of Zambia’s Economic and Equity Party (EEP), Chilufya Tayali has been arrested on Thursday for a post on his Facebook page weighing in on the treason case against main opposition leader Hakainde Hichilema for obstructing the motorcade of President Edgar Lungu.

Tayali’s post on Thursday called out the Inspector General of Police Kakoma Kanganja for “covering his ineficiency” by charging Hichilema with treason.

“Kanganja is just covering his inefficiency to charge HH with Treason, otherwise he should be an accomplice, where was his police to clear the way long before. That should have never happened, but maybe Kanganja planned it that way to kill the President or frame HH,” the Facebook post read.

Another leader of the opposition in #Zambia has been arrested for alleged libel on his FB page against the police boss. Here's his crime: pic.twitter.com/Ijk43glU0p

This led to his arrest same day and libel charge, police spokesperson Esther Katongo confirmed in a statement.

As at Friday morning, the opposition leader is reported to be in detention.

Hakainde Hichilema, leader of the main United Party for National Development (UPND), and five others were charged on Wednesday with treason after refusing to give way to the president’s motorcade at Mongu, 500 km (300 miles) west of the capital Lusaka.

Hichilema, who is still in detention, accused the president of deploying police to his residence to ‘kill’ him. He was arrested on Tuesday after police fired tear gas into his residence and forcibly arrested him.

President Lungu told a gathering of party supporters in Kaputo on Friday that the country has rules and regulations and if found guilty, culprits should be convicted, ZNBC reported.