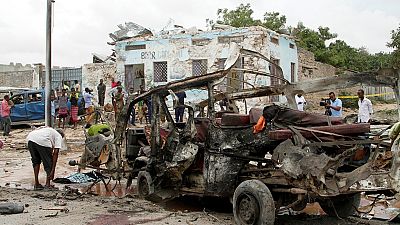 Security sources in Somalia have confirmed that a suicide bomber disguised in military uniform blew himself up on Monday morning. The attack led to the death of 5 soldiers, injuring 15 others in a military training camp in the capital, Mogadishu.

A BBC journalist based in the capital, Ibrahim Aden, has tweeted that Al Shabaab militants have claimed responsibility for the attack.

#Somalia:#images from the scene of day's attack in military camp in Mogadishu. pic.twitter.com/IeOpBYwenh

Reuters reported about the death of a government worker on Monday in Mogadishu, after a bomb was planted in his car. “The car bomb killed a junior government worker,” Abdifatah Omar Halane, the spokesman for Mogadishu’s mayor, said.

BREAKING: #AlShabaab claims to have killed 25+ #Somalia military officers/trainers in the deadly explosion in a military camp in #Mogadishu

President Mohammed Farmajo last week declared war with Al Shabaab. The militants have since then stepped up attacks in Mogadishu to challenge the government. The president, on assumption of office, promised a $100,000 prize for information on planned bomb attacks.

On Sunday, a car bomb exploded outside a military base in Mogadishu, killing an estimated 15 people, a military official confirmed. Reports noted that the death toll could rise as a minibus carrying passengers was destroyed in the blast.

“At least 15 people mostly civilians died in the blast,” Major Hussein Nur, a military official, told Reuters. “We do not know the exact figure of casualties. All the people on board the ruined minibus perished. Soldiers and other private security guards also died,” he added.