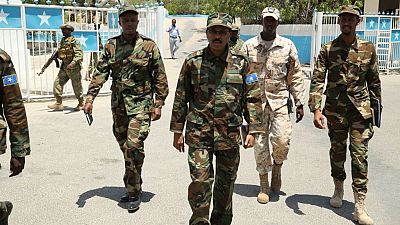 Farmaajo, who was wearing a military uniform, made the call on Thursday after a meeting with top security officials where he offered amnesty to those who will renounce violence.

“The President offers amnesty to the brainwashed youth and pledges education and job opportunities for them if they renounce violence,” a statement from the presidency said.

President M_Farmaajo offers amnesty to the brainwashed youth and pledges education & job oportunities for them if they renounce violence.

The president called on Somalis to stand with the armed forces as they fight the terror groups.

Heads of intelligence agency, military, police and Mayor of the capital Mogadishu were approved by the Council of Ministers on Thursday.

Farmaajo promised at his inauguration in February that he will provide support for al Shabaab fighters who surrender to integrate within the community.

Al Shabaab has been fighting government and African Union peacekeepers for years to impose its harsh interpretation of Sharia law in the country.