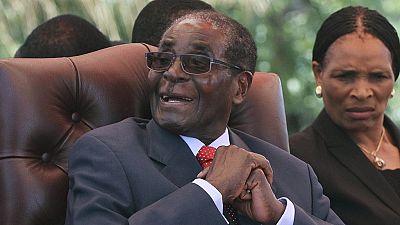 Zimbabwe President Robert Mugabe has been presented with a special massage chair by his cabinet ministers as a belated birthday gift.

The president, who celebrated his 93rd birthday on February 21, was presented a 9 carat customized wrist watch and a pen in addition to the chair on Monday morning during a ceremony at the State House, state media ZBC reported.

Mugabe was in the company of his wife, 51-year-old Grace Mugabe who had said in November 2015 that her husband will continue to be president until 100 and will govern from a special wheelchair.

“We are going to create a special wheelchair for President Mugabe until he rules to 100 years, because that is what we want,” Mrs Mugabe said at a political rally in Harare.

Late last year, the first lady told a women congregation that she was ready to run for the presidency since she was doing everything for her aging husband.

President Mugabe expressed gratitude for the gift which he says is a manifestation of team spirit which should prevail in serving the nation.

The oldest serving president has faced a lot of criticism over his age and the tumbling economy.

The southern African state has faced stiff inflation in the recent years with cash shortages hitting hard on people and the entire economy.