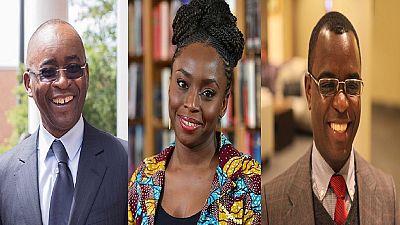 Chairman, Econet Wireless Group Strive Masiyiwa led the trio from Africa by ranking 33 for his energetic and well-rounded philanthropy making an impact in Africa, the magazine noted.

Masiyiwa has been lauded for supporting orphans, funding scholarships, and fighting hunger, poverty, and Ebola.

Novelist and Essayist Chimamanda Ngozi Adichie was ranked 42 for her powerful voice in challenging her audiences to think differently and more expansively about Africa, identity, race, and gender.

Adichie is considered a feminist icon and a fearless political and cultural critic.

Executive Director, Sexual Minorities Uganda Frank Mugisha ranked 44 for speaking out against Uganda’s Anti-Homosexuality Bill, which mandated life in prison for LGBT Ugandans, and led the campaign that eventually led to the bill’s invalidation by the courts.

37-year-old Mugisha came out at age 14 and he leads the LGBT community to face open hostilities.

The three are in the list with other great world leaders including the head of the Roman Catholic Church, Pope Francis, German Chancellor Angela Merkel, Canadian Prime Minister Justin Trudeau, and American basketball star LeBron James.

The Senior Editor of the magazine, Geoff Colvin explained that they were selected for excelling at leadership by acknowledging reality and offering hope, bringing followers physically together and building bridges.