Peru declares state of emergency due to deadly floods 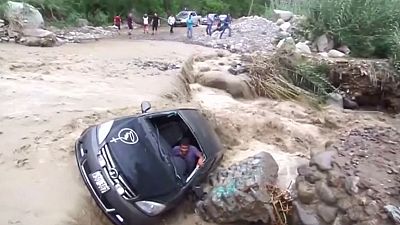 A car owner had a lucky escape in Peru as he tried to cross a swollen river. His vehicle was flipped be the raging current and quickly filled with water but he managed to reach safety.

He was fortunate. At least 75 people have died and more are missing after several days of torential rain which have caused the worst flooding in almost 30 years.

A state of emergency has been declared across half the country and at least 100,000 people have been left homeless.

“My house is full of mud, a rock hit my mother in her hip and she almost swallowed the water. We need help,” said one woman.

Emergency camps have been set up near the capital Lima. There are food and drinking water shortages in many areas and whole communities have been cut off by mudslides, destroying roads and railway tracks.

The government has sent in the armed forces to support search and rescue teams but also to help police control law and order.

And the worst is not over. The country faces another month of flooding, blamed on a local El Nino phenomenon, which has already delivered 10 times as much rainfall than usual. 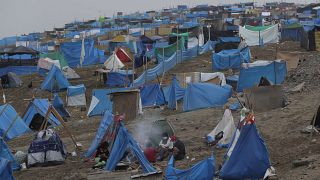