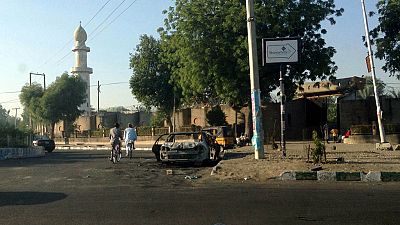 Three suicide bombers killed four people and injured eight others in a village near the northeast Nigerian city of Maiduguri, a police spokesman said on Sunday.

“Four people which include a Civilian JTF , a woman and her two children died while eight others sustained injuries,” he said.

A man and two women blew themselves up after they were challenged by Civilian JTF, a government-approved militia group.

The Boko Haram insurgency has killed more than 15,000 people since 2009 and forced some two million to flee their homes.

The Nigerian army, backed up by neighbors, have retaken most areas held by the group. But the jihadists still operate in the area of Rann, slipping over the porous Cameroon border after attacks.

The militant group has stepped up attacks and suicide bombings in the past few weeks as the end of the rainy season facilitates movement in the bush.