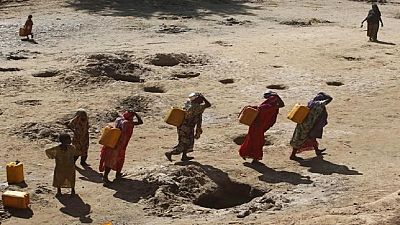 Some 110 people died in southern Somalia on Thursday and Friday as a result of drought, Somali Prime Minister Hassan Ali Khaire has said.

“About 110 people have died in the past 48 hours due to drought and severe water-related diarrhea in southern Somalia, especially in the Bay and Bakool areas,” Khaire said in a statement released on Saturday.

“Somalis, wherever they are, must rescue their needy brothers, who will starve if they are not helped. The government’s priority task will be to help those affected by the drought, “ the premier added.

This is the first drought-related death toll announced by Somalia’s government since it declared a national disaster on Tuesday.

Local authorities in the village of Awdiinle in the Bay area said at least 69 people, mostly children and the elderly, had died of water-related diarrhea.

“There is no medicine and the disease has now become an epidemic,” a local official in the village, 30 km from the regional capital Baidoa, told AFP.

“It is because of the drought that caused a general shortage of water. We need the help of humanitarian agencies,” he added.

At the end of February, Somalia declared a “national catastrophe” following the severe drought that has ravaged the country and threatens about three million people.

More than 20 million people are at risk of starvation in Somalia, Yemen, Nigeria and South Sudan mainly caused by on going conflicts that have ruined their agricultural economies.

The last famine in Somalia in 2011, the result of a severe drought in the Horn of Africa and aggravated by the conflict with the Islamist Al Shabab insurgency, killed 260,000 people.

The World Health Organization (WHO) estimates that more than 6.2 million people in Somalia – half of the population – are in need of emergency humanitarian assistance.

According to the UN agency, more than 363,000 children are severely malnourished, of whom 70,000 urgently need vital help.

Drought has led to the spread of acute diarrhea, cholera and measles, and nearly 5.5 million people are at risk of contracting water-borne diseases.