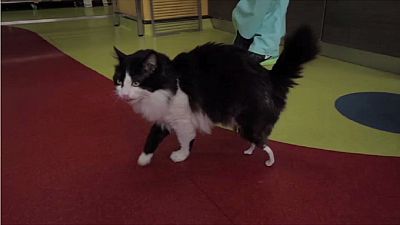 Pooh, the cat lost his hind legs in an accident and his chances of survival were slim.

The traditional solution would have had him drag a set of wheels behind him.

But he was taken to a Bulgarian vet who implanted bionic titanium legs. It’s an operation which had only ever been performed in Britain.

“What is the biggest challenge with this kind of surgery? I could say it’s a multiple challenging procedure. Many things could get wrong even now when it’s three months after the implementation and one of the stems is doing well. It’s not just one surgery with immediate final result, it’s more of a process,” explained Vladislav Zlatinov who carried out the operation.

Pooh is back on the prowl thanks to Bulgarian veterinary surgeon Vladislav Zlatinov and his new bionic paws pic.twitter.com/o10tprIrms

With just a few official publications in scientific journals on hand and no commercial implants available, everything had to be customised.

The cat had bionic titanium legs implanted and external prostheses on their paws.

“If we do our homework and we do our best in the surgery, we can give more patients the chance to save their lives. If there’s multiple limbs damages, or even why not to give them the best care possible, like not leave them living on three legs, which, by the way, it is something normal and very well accepted now. But with our surgery we can even increase the level of the good animal care,” added Vladislav Zlatinov.

It took six weeks for Pooh to recover before testing out his new paws and legs.

Now, Pooh is getting used to his new bionic legs, Zlatinov said, and added that Pooh notices them and tries to keep them clean.

The vet has since carried out a further three operations while more cats are on the waiting list.