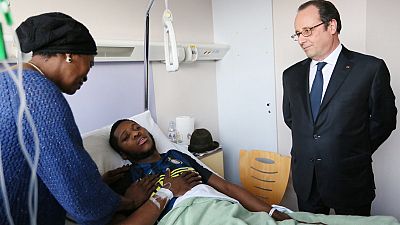 French President, Francois Hollande has gone to hospital to visit the man known as Theo who police allegedly ‘raped’ with a baton on 2nd February 2017.

A spokesperson for the police said that 8 officers could have been killed during the second of three nights of violence the incident has sparked in the Paris suburbs.

At one point during the skirmishes in Aulnay-sous-Bois late on Monday night, several police who ran out of tear gas fired real bullets into the air to scare off a crowd that had surrounded them.

One police officer is under formal investigation for rape along with three others accused of using unnecessary force.