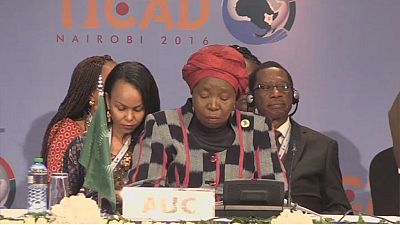 She made the observation on Sunday, during a church service in Carletonville, South Africa in what is seen as setting off her presidential campaign since her return form Addis Ababa.

Although she did not directly speak about accepting the nomination to run for presidency, she shared stories on how women were born to lead, giving examples of her own approach to leadership.

She also made it clear that she won’t tolerate corruption.

The service was hosted by the Faith Ministry Church and the ANC Women’s League, which has already made a pronouncement that Dlamini-Zuma is its preferred candidate for the ANC presidency.

President Jacob Zuma who is set to step down in December when his term comes to an end, has also publicly supported calls for a woman to take over from him.

At the moment, the continent only has one female president, Liberia’s Ellen Johnson Sirleaf, whose second term will come to an end in October.