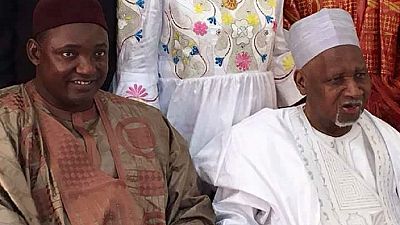 Gambian media reported that Barrow on Friday visited Jawara at his residence in the town of Fajara where they discussed issues relating to the country. Jawara congratulated Barrow on his victory in the December 1 polls and assured of his support for the new administration.

92-year-old Jawara served as Gambian Prime Minister between 1965 and 1970 before he was democratically elected as President. He was ousted in 1994 in a bloodless coup led by then 23-year-old Yahya Jammeh.

Jammeh will go on to transit from a military ruler to a civilian leader under the Alliance for Patriotic Reorientation and Construction, (APRC). He ruled the country for 22 years winning 4 elections during the period.

After his overthrow in 1994, Jawara left the country to the United Kingdom and only returned in 2002. Jammeh now in exile in Equatorial Guinea became the second President of the Gambia, whiles his successor, Adama Barrow becomes the third.

Barrow and the first leader, Sir Dawda Jawara sandwich the Jammeh regime which was reportedly characterized by rights abuse and largely deemed as autocratic. Jammeh agreed to leave the country after threats of military intervention by ECOWAS.