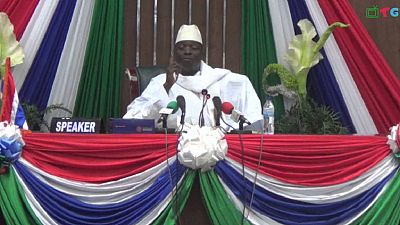 Yahya Jammeh governed The Gambia for over two decades and is on record to have said he could continue for a billion years if it was the will of Allah. Going into the last elections nothing showed that Jammeh will lose. But that is exactly what happened.

The news shocked the world but perhaps more shocking was his open acceptance of the outcome of the polls. Then another shock; Jammeh’s concession U-turn, but after about five weeks of mediation, negotiation plus back and forth, Jammeh accepts exile.

If a deal had failed, regional troops under the banner of the ECOWAS were ready to eject him. We look back at some factors that led to a change of guard in The Gambia. Cutting short what could have been a billion year rule – by the will of Allah.

The United Democratic Party (UDP) was the country’s main opposition outfit going into the last elections. They have been losing to Jammeh’s Alliance for Patriotic Reorientation and Construction, (APRC) in the last four polls. Their call via protests for electoral reforms sometime last year was also met with arrests and jail terms.

But months to the polls, seven opposition parties merged to form a coalition, simply put a united front to face Jammeh for the first time. This turned out to be the earliest move to unseating Jammeh.

Eventually, The Gambia had three candidates on the December 1, 2016 ballot paper. The then-incumbent Yahya Jammeh and two others. They were the opposition coalition’s unknown Adama Barrow and Mamah Kandeh – formerly of Jammeh’s party. The rest as they say: is history.

The Gambia has a unique voting system that involves the use of barrels and marbles. In the lead up to the polls Jammeh had stated that the electoral system as unique as it was, was also rig proof. This assertion he reemphasized in his concession call to Barrow.

So when Jammeh sought to question the integrity of the polls after conceding, it seemed fairly easy for all actors within and outside to condemn his position swiftly. The position of the election chief in defending the outcome of the polls also played a crucial role.

After concession the only avenue open to a politician is the courts and Jammeh’s party did pursue that course only that lack of judges on the Supreme Court meant that the case could not be heard. Same as a last minute attempt to halt the January 19 investiture of Barrow.

Political stakeholders in the regional bloc (ECOWAS), at the continental levels (AU and EU), the global player, the United Nations, were united in one call, that the will of the Gambian voters as expressed in the December polls be respected and enforced.

So at every step of the ECOWAS mediation, the AU, EU, UN and other parties gave their backing and showed strong solidarity in the steps ECOWAS took. So much that the UN Security Council sat and passed a resolution in support of the ECOWAS military intervention.

In the end, all parties welcomed the acceptance of Jammeh to go on exile – he is currently in Equatorial Guinea, whiles Barrow returned to Banjul from Dakar where he took his oath of office.

The Gambia under Jammeh, refused accreditation to the EU observer mission with days to the polls and refused a foreign journalist entry to cover the process. There were fears by rights groups of stifling of media and that was buttressed when internet was cut on day of polls.
The government slammed the call to restore internet but people through social media platforms – especially Facebook and Twitter, kept reporting results that showed Jammeh was losing the polls.

In the aftermath of Jammeh’s refusal to cede power, several opposition media were shut yet local and foreign activists actively depended on Twitter to put out timely information of on-goings in the country.

Every move of the government official and unofficial seem to find its way onto social media first. Then there was the hashtag #GambiaHasDecided which became a source of discomfort for the government – arresting people wearing T-shirts with the inscription and pulling down signage which bore the hashtag.

After Jammeh’s infamous U-turn, there was a sign that his inner circle was gradually crumbling. It started with mass ambassadorial resignations then switched to ministerial bow-outs.

Perhaps to show that he still had men to fill the vacated posts, Jammeh fired and hired new appointees in the midst of the crisis. Eventually, after the ministers, his Vice-President over the last decade also resigned her position when his mandate expired.

Allied to these, the Army that early this year pledged allegiance to Jammeh as their Commander-In-Chief, had its head, the Chief of Defence Staff (CDS) stating categorically that he loved his men and that they were not going to fight any troops.

Jammeh at the end of his tenure and with the swearing-in of Barrow in Senegal had switched from calling the shots and being the tough guy, he was post January 19 seeking extension of his mandate as mediation efforts continued, those talks have landed him in Equatorial Guinea.