Fatal fires and floods ravage parts of Chile and Peru 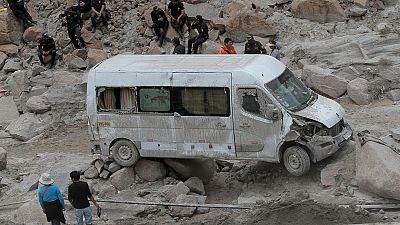 Parts of Chile are engulfed in flames as wildfires rage in central and southern areas.

Chile has survived earthquakes, tsunamis and fires. Let’s give them a hand, they’re suffering the biggest fire ever registered there RT&Give pic.twitter.com/wrh35pEccE

The flames have claimed the lives of at least 11 people, mostly firefighters and police officers.

Five individuals have been arrested on suspicion of arson.

The government says the fires are the worst in Chilean history.

In the town of Lircay a post-colonial hotel collapsed into the raging Sirca River.

Authorities say four people have been killed by the waters, three trapped in a car that was swept away in the torrent.

Forecasters say the heavy rain looks set to continue putting parts of central and southern Peru at risk of flooding until April.