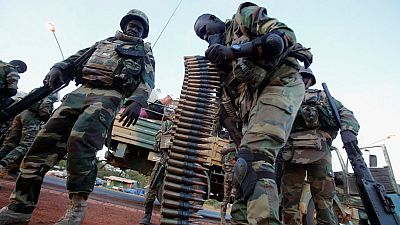 The 7000-man military mission in The Gambia is expected to stay in the country to search for hidden weapons and secure the country for an unspecified period.

This was disclosed by the ECOWAS Commission President Marcel de Souza in Senegal on Saturday during a visit to the bloc’s military intervention headquarters in Dakar.

“We are certain that there are secret weapons depots and we have consequently included the search of such weapons to ECOMIG mission. That’s why ECOWAS forces will secure the Gambian capital and the Gambian territory for a given necessary time,” he quoted in a report by Gambian journalist Alhagie Jobe.

“We will look for hidden weapons and mercenaries will be whisked away to create a true situation of tranquility, to secure the return of populations who fear reprisals and to ensure that the country regain its national unity,” Marcel de Souza added.

We will look for hidden weapons and mercenaries will be whisked away to create a true situation of tranquility, to secure the return of populations who fear reprisals and to ensure that the country regain its national unity.

Gambian President Adama Barrow on Sunday called on the West African bloc to maintain the military force in the country to guarantee his safe return.

“My wish, my request, is that the ECOWAS forces remain until the general security situation has been generally re-established,” Barrow’s adviser Mai Fatty read from a statement to the media.

“We are waiting for a public declaration by the heads of the security services on their commitment to loyalty to the Republic and the Constitution, as well as their allegiance to the Head of State,” he added.

Adama Barrow is still in neighbouring Senegal where he was sworn-in at his country’s embassy in Dakar on Thursday.

He is expected to return to the country this week.

Former President Yahya Jammeh exiled in Equatorial Guinea, is accused of emptying the coffers of the country before leaving on Saturday.