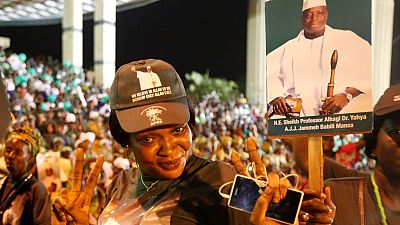 Gambia’s ruling party, the Alliance for Patriotic Reorientation and Construction (APRC) on Thursday filed an application in the Supreme Court with the aim of blocking the inauguration of President-elect, Adama Barrow.

The swearing-in of Barrow – an opposition coalition candidate who defeated outgoing Yahya Jammeh – is slated for January 19. It has however been dogged by uncertainty in the wake of Jammeh’s refusal to accept the poll outcome.

Supreme Court Chief Justice Emmanuel Fagbenle, confirmed receipt of the petition, which was filed by Jammeh’s party but did not give a date when a decision will be made over it. “It is filed today with the court registrar,” said Fagbenle.

The inauguration of the president-elect should be held when Jammeh's term officially ends. The court does not have any mandate to put an inauguration on hold.

However, the secretary general of the Gambia Bar Association, said an injunction would be unconstitutional.

According to Aziz Bensouda, “The inauguration of the president-elect should be held when Jammeh’s term officially ends. The court does not have any mandate to put an inauguration on hold.”

This becomes the second time that Jammeh’s party has filed a case before the apex court. The first case, which was a poll petition seeking the court to annul the December 1 polls failed to take off. The court failed to get judges from neighbouring countries to sit on the case. Hearing of that case was pushed to May 2017.

President Yahya Jammeh lost last month’s election but has refused to accept his defeat, the latest case seeking an injunction aimed at blocking the swearing in of his rival comes at a time when ECOWAS mediators are making a final effort aimed at getting Jammeh to peacefully hand over power.

Barrow and his party, who have received the support of the international community, have said they will go ahead with his inauguration on Jan. 19 despite Jammeh’s rejection of the result.

Jammeh has ruled the country for over two decades since coming to power through a bloodless coup d’etat in 1994. The election defeat is the first he has suffered and this was his fifth presidential bid. His loss was celebrated across the tiny West African nation and by rights groups across the world.