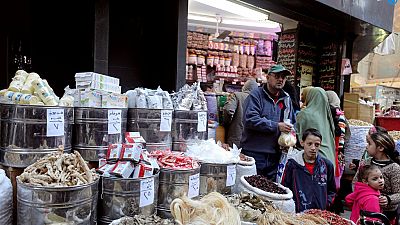 Amid an acute medicine crisis, Egypt’s spice dealers have seen their customers grow, as people turn to herbal remedies.

Cost of some generic and even life-saving medication have recently increased due to some economic measures that have hit medicine supply in pharmacies.

Early last year, a lack of foreign exchange made it difficult for pharmaceutical companies to import ingredients needed to make generic medicines which millions of poor Egyptians rely on.

In May, the health ministry raised the price cap on medicines that cost up to 30 Egyptian pounds ($1.59) by 20 percent in an effort to address drug shortages.

In November, Egypt floated its currency, abandoning a peg of 8.8 pounds to the U.S. dollar and allowing the currency to roughly halve in value.

Many ordinary people, such as factory worker, Mohamed, are no longer able to afford medicines.

“Medicine has become very expensive and I can’t afford it. Two vertebrae in my back are causing me pain, and I always come here to the herbal store where I get oils and medical herbs which help me relax. Medicine is very expensive and it has side-effects, which the government doesn’t know how to solve,” said the father of four.

From insulin shots to medication for stroke, and even some common painkillers have become difficult to find.

Patients say their substitutes have harmful side effects.

Al-Attar’s role is like that of a pharmacist. Customers explain their condition and he then produces a concoction of herbal remedies with ingredients ranging from honey and ginger to anise.

“It’s about 70-80 percent. Seventy or eighty percent is the percentage of demand for natural treatments which stimulate the immune system and which fight off viruses. For example, if someone suffers from kidney disease, he can buy camel’s hay which is also exported. We advise people that they should deal with someone who is knowledgeable,” he said.

Egypt’s cost of living is also on the rise.

In cities and towns, food and beverage inflation touched 28.3 percent in December. Healthcare inflation stood at 32.9 percent while transportation was 23.2 percent.

Alternatively, local spices and herbs cost 5 to 10 Egyptian pounds per kilogram ($0.27- $0.53) which many find more affordable than a trip to the drug store.

“Medical herbs are cheap and help people cope with the rise in prices which makes it difficult for people to buy medicine. So I get the herbs which are both affordable and get the job done,” said customer Ahmed Abdullah.

Herbal shops selling everything from spices to rare herbs and plants have been around for decades, but their popularity had somewhat decreased in recent years.

But the medicine crisis has sent Egyptians back to seeking out ancient cures.