Spotlight on African women and children in 2016 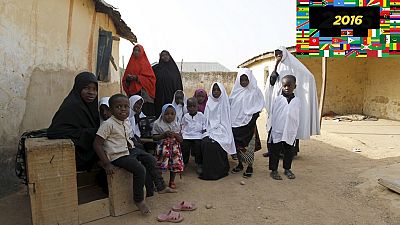 Women and children in Africa deserve human rights and protection, yet it was hardly the case in some parts of Africa in 2016.

The year began with a Gambian government memo directing women who work in government ministries, agencies and departments to cover their hair. The government later repealed the directive after condemnation.

In South Africa, five children were found dead in a freezer in which they were believed to have been accidentally trapped. In the same country, human rights activists condemned a decision by a municipality to offer scholarships to virgins.

Women is Somalia decided to march in protest against attacks by al-Shabaab after a Mogadishu restaurant was bombed killing 19 people.

Some good news however is that the 8-year-old boy who was attacked by chimpanzees in the Democratic Republic of Congo has new lips after a series of reconstructive surgeries in New York.

Meanwhile, a 4-year-old Egyptian boy was mistakenly sentenced to life imprisonment in absentia. The court was supposed to have sentenced a 16-year-old with a similar name instead.

In politics, Benin’s three-time female presidential candidate vied for the seat again for the fourth time to show that women can even do it better when given the chance. She did not get the chance finally.

Cameroon was shocked by a video that showed a pregnant woman in labour who was refused admission at a hospital. She died on the floor of the hospital while a relative helped deliver her still twins. Hundreds protested against her treatment.

Kenya put smiles on the faces of women when members of parliament approved a bill that will make it mandatory for employers to provide breastfeeding stations for nursing mothers in the workplace. In a building collapse that killed many people in the country, Kenya Red Cross rescued a baby after 3 days in the rubble.

High school students in Burundi were in fear when hundreds of students were suspended and a dozen arrested nationwide for defacing President Nkurunziza’s photo in their textbooks.

Two African female presidents made it in Forbes 100 most powerful women in 2016. They are Liberia’s president Ellen Johnson-Sirleaf and Mauritius president, Ameenah Gurib-Fakim.

A 16-year-old Chadian girl was raped by two men who later posted the video of the rape on social media, angering many across the world. The two suspected rapists who are sons of senior officials in the Chadian regime escaped the N’Djamena prison.

Four people including the victim’s mother were charged for fatal female circumcision of a teenager who died after the process. Her twin sister who was also cut survived.

Very shocking was when the UN’s childrens’ agency UNICEF reported that more than 650 children had been recently recruited by armed groups in South Sudan despite agreement to stop recruiting children. A number of children were released by some armed groups.

A thirteen-year-old boy from Egypt made headlines for travelling alone from his hometown in Egypt to seek medical treatment in Italy for his little brother who suffers from the blood disorder thrombocytopenia. The Italian government have decided to admit Ahmed’s family and treat his brother at no cost to them.

A Nigerien army woman won the maiden UN Military Gender Advocate Award for her service with the United Nations Mission in Mali between 2014 and 2015.

Later in the year, UNICEF secured the release of 876 children held by the Nigerian army after Boko Haram fightback. This was after the release of twenty one Chibok girls by the insurgent group Boko Haram facilitated by the International Red Cross and the Swiss government.