Burundi threatens to sue AU, pull out troops from Somalia 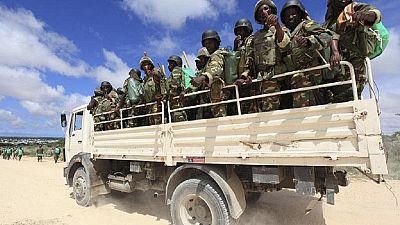 Burundi has threatened to sue the African Union (AU) over failure to pay its peacekeeping troops in Somalia.

President Pierre Nkurunziza said the Burundian forces serving under the African Union Mission in Somalia (Amisom) have gone for more than one year without salaries.

“Failure by the African Union to sort out the problem by next month, Burundian soldiers will pull out of the mission,” he said.

Failure by the African Union to sort out the problem by next month, Burundian soldiers will pull out of the mission.

With 5,432 soldiers in Somalia, Burundi is the second leading contributor of troops under Amisom after Uganda. Others are Kenya, Ethiopia and Djibouti.

The president accused the African Union of undermining’ its peacekeepers whom the country spends a lot of its resources on, training and equipping them before they are sent to Somalia.

“People should know that no one can afford to pay us our soldiers’ lives and those who were injured,” he said.

“We made an agreement with them (AU) and then they decided not respect it.

Burundi has faced widespread international criticism over the deadly political turmoil that followed Nkurunziza’s pursuit of a third term last year, which many in the country called unconstitutional. Hundreds have been killed.

Burundi is scheduled to rotate three battalions of soldiers into Somalia in January, military spokesman Col. Gaspard Baratuza said in a statement earlier this week.