Nail salons targeted by immigration officers in the UK 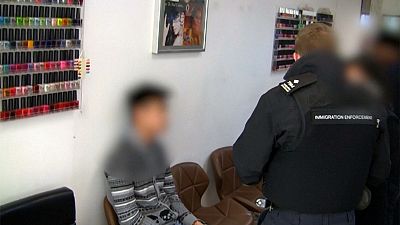 Nail salons in the UK have been targeted by authorities as part of an operation they say aims to tackle modern slavery.

Immigration officers say they arrested just under 100 people, mostly from Vietnam, and more than a dozen were considered to be at risk from slavery.

Andy Radcliffe from UK Immigration Enforcement said: “Unskilled or low-skilled work will attract people who may be in the UK illegally, may have been brought to the UK for that specific purpose or they may fall into that once they’re here.

“So that’s why we use an intelligence-led approach to target those sectors of the economy where the incidences of illegal working and potential labour exploitation are rife.”

The raids are part of a week-long operation called Magnify, which involves numerous government agencies.

Some 70 businesses face fines in light of the recent raids.