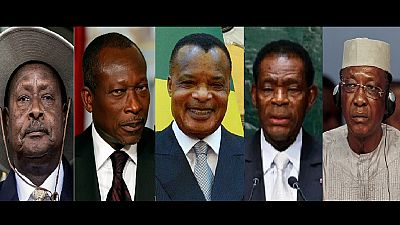 More often than not, elections are the main political engagement across the continent. The year 2016 was no different.

A number of presidential and legislative elections took place over the course of the year. As part of our review of the ‘fading’ year, we take a quick look at all the polls that took place this year.

With special focus on the presidential race, we will look at them within the context of main players and how they ended, and if there were any special circumstances around the particular polls.

CAR: Touadera’s win and nation’s dream of a return to stability

CAR voted on 14 February in a second round poll for president after a first round in 2015 failed to produce an outright winner.

Main Contenders were: Faustin Archange Touadera, 58, a former mathematics teacher, and one Anicet-Georges Doluguele.
Winner was Touadera who scooped 62 percent of the votes against his main rival Dologuele.

On 18 February Uganda went to the polls to elect a president amid internet cut
Main Contenders were president Yoweri Kaguta Museveni who was running for his fifth term in office against Kizza Besigye, his former physician during their war days against Idi Amin.

Benin held presidential elections on March 6 but no outright winner, a second round on March 20 however gave a successor to Thomas Boni-Yayi.

Main Contenders were Lionel Zinsou – Boni Yayi’s PM – and businessman Patrice Talon.
Winner was Talon with more than 65% of the votes.

Congo Republic also went to the polls to choose a president. Like the Ugandan poll there was communication cut throughout the country for about 5 days.

Main Contenders were incumbent Denis Saasou Nguesso and a former military general Jean Marie Michel Mokoko. Congo had in 2015 voted in a referendum to scrap term limits in order to allow the incumbent contest in the polls.

Winner was Sassou Nguesso who won a decisive first round victory with 60.39% of the votes, a result which was contested by his two main competitors.

Niger also went to the polls in February in respect of a president and parliament, the presidential went into a second round also held on March 20. The first round on 21 February failed to produce a clear winner.

Senegal referendum was held on March 20.

“It is clear from (figures) county committees (for counting of votes), pending the official announcement, the current yes would win the election with 62.9% against 37.1% for No,” said Minister Abdoulaye Daouda Diallo at a news conference.

At the heart of the vote was, a constitutional amendment which was proposed by President Macky Sall among others reducing the presidential term in office from the current seven to five years.

Strengthening the rights of citizens and the opposition, while enforcing the powers of the legislature and judiciary. These were part of promises Sall made during elections in the country.

The only other May election was local elections held in Burkina Faso.
Main Contenders were incumbent President Idris Deby Itno and main opposition leader Saleh Kebzabo.

Winner was Deby who polled 60 per cent of the vote in the first round far ahead of Kebzabo who won just over 12 per cent but said the vote was rigged.

Djibouti: the elections with breaches yet declared ‘free and fair’

Djibouti also went to the polls to choose a president on April 8. Main Contenders were Omar Guelleh and an opposition coalition leader. Guelleh who has been in power since 1999 was running for a fourth term. The AU said there were breaches in the process but it was free and fair.

Winner was Guelleh who garnered almost 87 percent of ballots cast, according to the Interior ministry.

Equatorial Guinea: opposition got less than 2% as Nguema coasts

Main Contender was incumbent Teodoro Obiang Nguema. The two other contestants were Bonaventura Monsuy Asumu, representing the Coalition Social Democratic Party and Avelino Mocache Mehenga of the Center Right Party who got 1.5% of the votes each.

Winner was Teodoro Obiang Nguema, who won a sixth term extending his over three decades rule.
According to the official results by the National Election Board, Obiang won with 93.7% of votes.