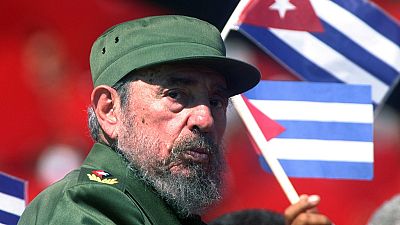 <p>Two African leaders have confirmed their participation in the funeral of the late Cuban leader and nationalist, Fidel Castro. Another leader has suspended his political campaign to mourn.</p> <p>South African government confirmed that embattled president Jacob Zuma will be attending the event in the Cuban capital, Havana. Zimbabwean President Robert Mugabe left Harare on Monday evening to Cuba for the event.</p> <p>Mugabe was seen off at Harare International Airport by the two vice presidents, Cde Emmerson Mnangagwa and Cde Phelekezela Mphoko, several government ministers and service chiefs.</p> <blockquote class="twitter-tweet" data-lang="en"><p lang="en" dir="ltr">African leaders mentioned who will go to <a href="https://twitter.com/hashtag/Cuba?src=hash">#Cuba</a> are: 1st Robert Mugabe of <a href="https://twitter.com/hashtag/Zimbabwe?src=hash">#Zimbabwe</a> and 2nd Jacob Zuma of <a href="https://twitter.com/hashtag/SouthAfrica?src=hash">#SouthAfrica</a></p>— harumutasa/aljazeera (@harumutasa) <a href="https://twitter.com/harumutasa/status/803316794907914240">November 28, 2016</a></blockquote> <script async src="//platform.twitter.com/widgets.js" charset="utf-8"></script> <h2>Zimbabwe – Cuba relations</h2> <p>The two countries (Zimbabwe and Cuba) share close ties that were born during the time of the liberation struggle for Zimbabwe when Castro’s Cuba provided moral, material and military support to the cadres waging the liberation struggle. </p> <p>After the liberation struggle, Cuba under Castro continued to play an influential role in educating local science and maths teachers for the massive new education system. The programme runs till date at present day Bindura University of Science Education.</p> <p>‘‘Zimbabwe at independence and up to date continues to benefit from the recruitment of Cuban medical doctors some of whom are in specialised such as oncologists, anesthetists, gynaecologists and others,’‘ the Zimbabwe Broadcasting Corporation said on its news portal.</p> <a href="http://www.africanews.com/2016/11/26/photos-castro-and-africa-nkrumah-sankara-mandela-gaddafi-and-others/" target="_blank">[Photos] Castro and Africa: Nkrumah, Sankara, Mandela, Gaddafi, Mugabe and others</a> <h2>South Africa – Cuba relations</h2> <p>The South African government has confirmed that President Jacob Zuma will be in Havana for the funeral of the late leader who died aged 90. All South African flags are supposed to fly at half mast till 4th December.</p> <p>‘‘President Zuma has ordered that the National Flag be flown at half-mast at all stations in South Africa tomorrow, 29 November 2016, on the date of the funeral of former President Castro. The National Flag is flying at half-mast in the South African mission in Cuba until the 4th of December.<br />  <br /> ‘‘Condolence books have been placed at the Union Buildings in Pretoria, Tuynhuys in Cape Town and at the offices of the Premiers throughout the country,’‘ a government statement read.</p> <p>Before the statement, Zuma expressed his condolences in an earlier statement, which came after the <a href="http://www.africanews.com/2016/11/26/mandela-foundation-condoles-with-cuba-over-death-of-fidel-castro/" target="_blank">Mandela Foundation’s condolence message</a> issued on Saturday -hours after the death was reported. </p> <p>After South Africa gained freedom in 1994, Cuba and South Africa, under Presidents Castro and Mandela respectively, formed a strong bond of solidarity and friendship. Cuba was an open supporter to the anti-apartheid struggle.</p> <p>“President Castro identified with our struggle against apartheid. He inspired the Cuban people to join us in our own struggle against apartheid. The Cuban people, under the leadership and command of President Castro, joined us in our struggle against apartheid,” said President Zuma.</p> <p>“As a way of paying homage to the memory of President Castro, the strong bonds of solidarity, cooperation and friendship that exist between South Africa and Cuba must be maintained and nurtured,” he added.</p> <p><strong><span style="color:red;"><span class="caps">SUGGESTED</span> <span class="caps">READING</span></span></strong> <a href="http://www.africanews.com/2016/11/26/ethiopians-celebrate-castro-somalis-fume-at-him-over-1977-ogaden-war/" target="_blank">The 1977 Ogaden war: Why Somalis fume at Castro but Ethiopians celebrate him</a></p> <h2>Gambia’s Yahya Jammeh suspends campaign for Castro</h2> <p>Gambia’s President Yahya Jammeh also suspended his presidential campaign ahead of next Thursday’s election as a mark of respect for Fidel Castro, the <span class="caps">BBC</span>’s reporter covering the elections has said.</p> <p>Umaru Fofana said in a tweet, ‘‘Gambia’s President Yahyah Jammeh suspends his presidential campaign “to mourn” the death of Fidel Castro, information minister tells me.’‘</p> <p>Mr Jammeh who came to power in 1994 is said to have close links to Castro. Cuba was one of the first countries to establish diplomatic relations with Banjul after Mr Jammeh took power following a coup.</p> <p>Like in other African countries, Cuban doctors have also been working in The Gambia. Jammeh is seeking re-election for a fifth term and for the first time he will be facing a single major opposition candidate.</p>