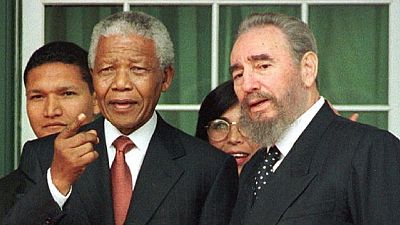 The Nelson Mandela Foundation has sympathized with the government and people of Cuba in the wake of the death of Fidel Castro, the revolutionary father of the South American country.

In a statement released hours after Cuban state television announced Castro’s death, the Mandela Foundation said, ‘‘On behalf of our Chairman, Trustees and Staff, the Nelson Mandela Foundation would like to send our deepest condolences to the people and government of Cuba on the passing of Fidel Castro.

‘‘President Mandela had a close relationship with President Castro and always remembered his solidarity with the anti-apartheid movement. He even went so far as to suggest those who criticized his relationship with Cuba and Libya, for instance should “jump in the pool,” the statement added.

But Cuba, the moment we appealed for assistance they were ready to do so and they did so. Why would we now listen to the Western world when they say we should have nothing to do with Cuba? It is just unreasonable.

“The Cuban people hold a special place in the hearts of the people of Africa. The
Cuban internationalists have made a contribution………” pic.twitter.com/vhxtD5Rr1f

In 1998, Mandela and Castro met during the Non-Aligned Movement Summit in Durban, South Africa. There were sixty Heads of State attending the meeting which run between September 2 – 3.

Later, the Cuban leader was accompanied by Mandela as he addressed the South African Parliament on September 4. Castro, who is in the country on an official visit, later visited Mandela’s old cell on Robben Island Prison.

In 2001, Fidel Castro was back in South Africa, the two met at Mandela’s home in Houghton, Johannesburg. Castro failed due to ill health could not make it to the funeral of Nelson Mandela in 2013, but his brother and successor, Raul Castro, was present.

The Foundation went on to quote Mandela talking about his solidarity with the Cuban government in a 1990 documentary. “The first country we approached was the United States of America. We could not even succeed to come close to the government, and they refused to assist us.

‘‘But Cuba, the moment we appealed for assistance they were ready to do so and they did so. Why would we now listen to the Western world when they say we should have nothing to do with Cuba? It is just unreasonable,” Mandela said.

The former leader was rarely seen in recent years, although he wrote newspaper commentaries on world affairs and occasionally met with foreign leaders. The former revolutionary had been frail for some time but recently was still able to meet foreign dignitaries such as the presidents of Vietnam and Portugal.