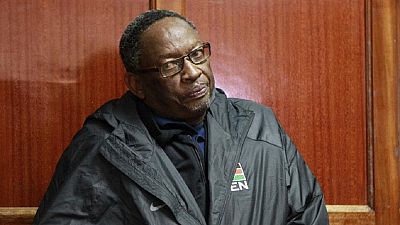 The deputy chairman of Kenya’s Olympic committee was on Friday charged with stealing money and Nike sportswear intended for the team at the Rio Olympic Games.

Bernard Ekumbo is the fourth official from the National Olympic Committee of Kenya (NOCK) to be formally charged over the embarrassing scandals which tarnished Kenya’s best-ever performance at a Games.

Ekumbo is accused of stealing one million shilling ($10,500) and the team uniforms, whose disappearance meant athletes showed up at the opening ceremony in mismatched outfits.

He denied both charges and will be remanded in custody until Monday when the court will rule on whether or not to release him on bail.

Ekumbo told the court that the cash was deposited into his bank account without his knowledge while he was already in Brazil, and said he was willing to refund all the money.

Ekumbo, who is also head of the Kenya Swimming Federation was arrested on Monday when police officers raided his upmarket Nairobi house, where bales of sports equipment, including running shoes and tracksuits, were found.

Another official, Fridah Shiroya, was set free after the prosecution dropped charges against her.

The kit disappearance was one of several scandals that gripped Kenya during the summer Games.

Further embarrassment ensued when it emerged someone had forgotten to book a plane ticket for javelin world champion Julius Yego — who went on to win Olympics silver — while 200m sprinter Carvin Nkanata’s accreditation was submitted late meaning he almost missed his race.

A parliamentary probe into the mismanagement of the Games was told in September how $20,000 was wasted as officials booked rooms for President Uhuru Kenyatta and the sports cabinet secretary aboard a cruise ship which were never used.

Despite the scandals Kenya scooped 13 medals, including six gold, in its best performance at the Olympics.