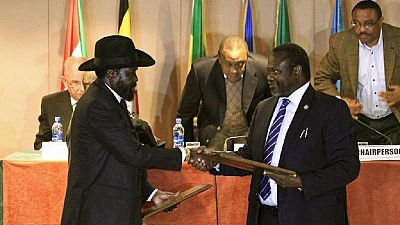 South Sudanese President, Salva Kiir, has said denouncing violence is the only way his main political rival-turned rebel leader, Riek Machar, will be granted amnesty, the Sudan Tribune reports. This is despite him granting amnesty to some 750 troops loyal to Machar.

“My brother Riek Machar thinks the only way for him to become the president of this country is violence, killing innocent people. I told him several times [that] there is no reason to fight. If you [Machar] want to be the president, wait for elections, but he did not listen”, Kiir said on Sunday.

Kiir disclosed that a number of people have approached him demanding that he pardons the armed opposition leader when he returns.

My brother Riek Machar thinks the only way for him to become the president of this country is violence, killing innocent people. I told him several times [that] there is no reason to fight. If you [Machar] wants to be the president, wait for elections, but he did not listen.

“They come asking me to pardon him. I tell them I have no problem with him. He is a citizen of this country and he can return anytime, but must denounce violence”, he clarified.

President Kiir had met Dinka elders who briefed him on their activities after they visited their counterparts from Equatoria and Nuer territories.

The over 750 troops Kiir pardoned crossed in to neighbouring Democratic Republic of Congo when fighting erupted in the capital, Juba in July this year. Local media reports quoted the country’s Defence Minister, Kuol Manyang, as saying that Juba was ready to welcome the armed opposition forces on exile in Congo.

Former first vice-president, Riek Machar who fled the country in July has repeatedly called for an armed resistance following renewed clashes with forces loyal of Kiir. He is currently in South Africa seeking medical attention.

Attacks on the country’s highways and other attacks on the civilian population has been laid at the doorstep of Machar – led rebels. His party, the Sudan Peoples Liberation Army – In Opposition (SPLM-IO) has denied any involvement.

South Sudan, Africa’s youngest nation, is embroiled in inter-ethnic and political strife. The oil-producing country became independent in 2011, it however descended into civil war two years later when a dispute between President Kiir and Machar ended with fighting, often occurring along ethnic lines. Both sides have targeted civilians, human rights groups say.

A peace pact in 2015 ostensibly ended the fighting but has frequently been violated. Major clashes broke out again in July.

The U.N. High Commissioner for Human Rights warned this week that South Sudan is suffering a rise in hate speech and incitement to violence against certain ethnic groups which could result in mass atrocities if the government does not act.