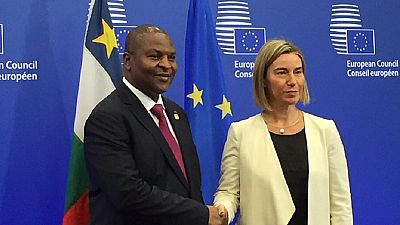 Norway has announced additional aid funds of NOK 47 million (estimated $5.5 million) to the Central African Republic (CAR) as part of a donor support conference led by the European Union (EU).

Norway’s Foreign Affairs Chief, Borge Brende in a statement said it was important for the international community to support the CAR ‘‘with a view to alleviating the acute humanitarian needs and contributing to more long-term peacebuilding. Norway is also concerned about the regional repercussions of the conflict.’’

‘‘The political differences underlying the humanitarian conflict need to be resolved, but this will take time. It is vital that the new Government promotes stability and gives priority to inclusive political dialogue and good governance, so that it can gain the trust of the people,’‘ he added.

The EU donor conference was held today in the Belgian capital, Brussels. It is aimed at getting CAR back on track after years of conflict that has adversely affected the country.

Emerging from violent conflict, the Central African Republic has made impressive progress over the last three years #RCAconf pic.twitter.com/03UUFLSu06

‘‘The main objective of the Brussels Conference on the Central African Republic will be to draw together commitments to help the authorities restore peace and security, renew the social contract and revive the economy.

‘‘In order to develop a consensus on needs and priorities for the next five years the CAR authorities requested the support from the World Bank, the United Nations and the European Union to prepare a joint Recovery and Peace Building Assessment.

‘‘This work will serve as basis for the national strategy to tackle recovery and peacebuilding,’‘ an EU statement noted.

The central African nation has been plunged into crisis with international bodies reporting that the potential for sectarian violence remained high. Indiscriminate violence and looting has occurred since the overthrow of the government in March 2013.

Long-serving president, Francois Bozize was toppled by the northeastern Seleka rebel alliance, escalating revenge attacks and a spiral of atrocities leading to the death of thousands.

The Central African country had appeared to be returning to normal after two years of bloodshed, holding peaceful elections and a transition early this year.

But despite the presence of thousands of UN peacekeepers and a few hundred remaining French troops, tensions remain high, and ten of thousands of people are still displaced. The violence between rival militias, which later on took a sectarian element, displaced one in 10 of the country’s 4.5 million people.