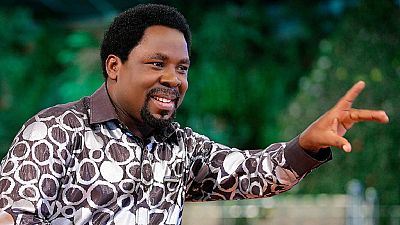 Popular Nigerian television evangelist, T.B. Joshua, has defended his prediction of the just ended United States (US) elections. He predicted a victory for former Secretary of State, Hillary Clinton in a Facebook post on November 6.

Even though Hillary lost to Donald John Trump, the preacher defends his stance in a post laden with democratic lessons. Among others; he points to the fact that Hillary had majority of votes – i.e. popular votes. Trump got lesser votes but won majority of the electoral college votes.

‘‘We have seen the outcome of the election in America. Having read, you will notice that it is all about the popular vote, the vote of the majority of Americans,’‘ his latest Facebook post read.

Democracy is all about accommodation. All democrats must value the process of democracy more than the product.

He addressed persons who sought to interpret his prophecy as having failed, stating that he was in a privileged position of being a prophet and best placed to speak about the outcome. ‘‘In this case, we need the Spirit of a Prophet to recognize or to know a Prophet. Our levels are different. We are not on the same level.

‘‘I see many people trying to interpret prophets on the basis of their own minds and ideas. The prophecy seems to cause uproar, to many who gave it different meaning and interpretation,’‘ he added.

The televangelist popularly referred to as ‘The Prophet’ also gave some perspectives about democracy and electoral campaigns. Whiles blessing America, he implored that the democratic process be valued more than the product of that process.

‘‘Finally, campaigns and elections in any democratic country in the world are never about one person, it is about the country we care and love. Whichever way it happens, we must accept the outcome and then look to the future (God), the Author and Finisher.

‘‘Democracy is all about accommodation. All democrats must value the process of democracy more than the product,’‘ he concluded.

The infamous Hillary victory post disappeared from his Facebook page hours after Trump was declared winner of the polls, which were not also ‘close’ as he had predicted. The post however reappeared after a huge social media backlash.

An email sent from the Social Media Department of the church to the BBC clarified that the failed prediction was “mistakenly removed and has been reposted as such is not our policy.”

This was the full text of the prophecy of November 6.

Trump was elected the 45th President of the United States of America. The 70-year-old secured 290 of the electoral votes as against main opponent Hillary Clinton who gained 232 of the votes according to the CNN poll center.

In percentage terms, Trump had polled 47.5% (representing 59.2 million votes) as against Clinton’s 47.7% (59.4 million votes.) The November 8 election was keenly contested after months of heated campaigns.