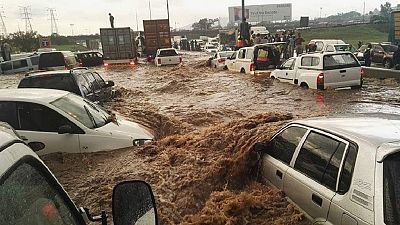 Meanwhile the government’s official twitter handle reports that the South Africa Weather Service has issued a watch for severe thunderstorms in Guateng province – Johannesburg is capital of the province.

Authorities in the City of Johannesburg are conducting mop up operations and warning citizens to be cautious on Thursday morning. The flash floods have caused chaos on the city’s roads – most of the roads have been cut off.

Seven people are believed to be missing after their vehicles washed away, the Johannesburg Metro Police Department said on Wednesday night.

One person is believed to have drowned. Hundreds of people also needed rescuing, News24 added.

The floods also caused chaos at OR Tambo International Airport, it is reported to have delayed flights and buildings several buildings flooded.

Passengers are advised that there has been flooding on the lower access road,it is suggested passengers make use of the upper drop-off level

Flash floods are rapid uncontrollable flows to low lying areas overwhelming drains, breaking river banks etc. It may be caused by heavy rain associated with a severe thunderstorm, hurricane, tropical storm, or meltwater from ice or snow flowing over ice sheets or snowfields.

N3 Buccleuch interchange is flooded in both directions at Linksfield Rd #Floods^TK pic.twitter.com/NTPJvuFBDH