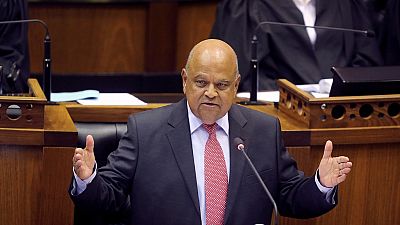 According to the country’s local paper, City Press, he is to be sued for his role in setting up a unit at the tax department a decade ago that is suspected of spying on politicians, including President Jacob Zuma.

This is happenening six days after separate charges were dropped against him.

Pravin Gordhan led the South African Revenue Services (SARS) for ten years untill 2009 but investigations on the case commenced in 2014.

The finance minister was questioned by a special unit of the South African police, the “Hawks”, in which Gordhan admitted the existence of the accused tax unit set up in 2007, but insisted that he acted within jurisdiction.

Meanwhile City Press spoke to two members of the “Hawks” who gave anonymous testimonies on eventual charges to be pressed.

“This is not overnight work. There is a lot that we still have to do, but they will be charged before Christmas,” said a senior Hawks official this week.

However, whe questioned by AFP, the spokesman of the Hawks, Hangwani Mulaudzi, denied these reports, recalling simply that the investigation “is still on going”.