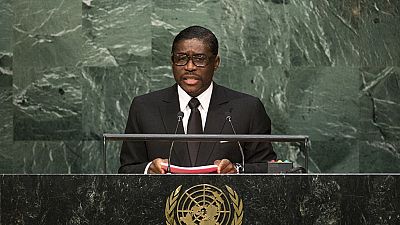 11 luxury vehicles and sports cars belonging to Teodorin Obiang Nguema, son of Equatorial Guinea’s president and vice president of the country have been confiscated by Swiss authorities.

The move forms part of a preliminary investigation into alleged corruption. According to an investigative journalist with the L’Hebdo news portal, Francois Pilet, the seizure of the vehicles was in the Swiss capital, Geneva on Monday October 31, 2016.

According to spokesman of the Geneva prosecutor’s office, Henri Della Casa, the cars belonging to Teodorin were impounded specifically in the freight zone at Geneva’s airport.

L’Hebdo displayed photos of the impounded fleet of fast cars which include a Bugatti Veyron, a Porsche 918 Spyder and several models of the Ferrari F12.

It is not the first time Obiang has had assets seized by an European government, four years ago, France issued an arrest warrant for him and seized his Paris mansion and several of his luxury cars.

Oil rich Equatorial Guinea is one of Africa’s largest oil exporters, but most of its 740,000 inhabitants are said to be living in poverty. Mr Obiang has yet to release a statement on the issue.