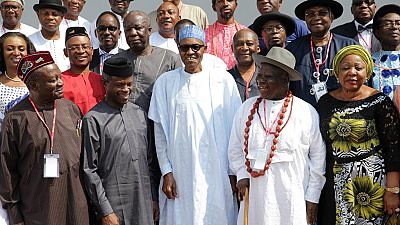 Leaders from Nigeria’s Niger Delta region have asked President Muhammadu Buhari to pull the army out from the area and order oil firms to move their headquarters there in a 16 point proposal they believe will restore peace to the oil rich region.

President Buhari met the leaders for the first time since militants started a wave of attacks on oil pipelines in January to push for a greater share of oil revenues.

The group presented the list of 16 demands from the impoverished region where many say they do not benefit from the oil wealth.

The list “includes the withdrawal of the military in oil producing communities in the region”, King Alfred Diete-Spiff, leader of the delegation said after the meeting, adding: “We don’t want the communities militarised.”

The delegation requested oil firms move their headquarters to the region so unemployed youths – who often join militants – could get more jobs.

Foreign firms active in Nigeria are often based in the commercial capital, Lagos.

President Buhari said military chiefs were putting together their own assessment of the militancy, his office said in a statement on Tuesday.

Adding he would “revisit the situation” in the Niger Delta once he had all of the reports from service chiefs, which would be added to the one provided by Niger Delta leaders.