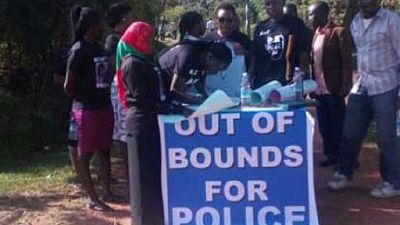 Uganda’s main opposition figure, Kizza Besigye, has returned to the country after he flew out on October 17 saying he was taking a break from police harassment. His supporters have now taken over the security of his home, the Ugandan Daily Monitor portal reports.

The action of the supporters is apparently to keep out the situation where police took over security at Besigye’s home, preventing the Forum for Democratic Change (FDC) flag bearer from leaving home under any circumstance.

During a previous return to the country after a European tour, Besigye said he was ‘kidnapped’ on arrival by security personnel on the stairs of his flight, the police justified it as a case of ‘preventive arrest’ and drove him to his home.

Subsequently, the police took over the security of his Kisangati home. Besigye was prevented from attending a court hearing in which he was charged with treason. He also stated on twitter that the police action meant he could not attend a funeral of a close friend.

His party’s representation in parliament had hinted that they will file a case against his arrest and harassment by the security forces.

Just taking off for Amsterdam. I'll have a weeks break from harassment by rogue State institutions. Have a great week tweeps! pic.twitter.com/BivyWOeiau

The police chief, had warned Besigye and the FDC that any parallel celebrations to the government organized event will not be accepted because Uganda had only one government.

Whiles out of the country, Besigye attended a ceremony at the University of Manchester, where his wife, Winnie Byanyiwa, was honoured with a doctorate for her role in advocating women’s rights. Winnie is executive director of Oxfam international.

He also went to Washington to press for tougher sanctions against the Yoweri Museveni-led government.