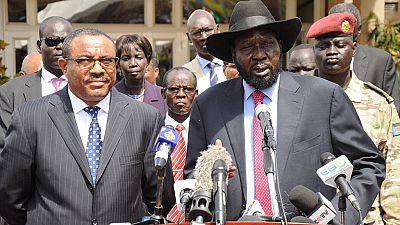 Ethiopia’s Prime Minister, Hailemariam Desalegn, has said they will not support any negative forces to launch attacks on neighbouring South Sudan.

Hailemariam arrived in the South Sudanese capital, Juba, on Friday morning for a one-day official visit. He addressed the country’s parliament and also held bilateral talks with president Salva Kiir.

“We will not support an armed struggling group or anyone who opts for path of war and therefore we will not allow any armed movement which is detracting from peace in our region both in Ethiopia and South Sudan.

‘’(And) will cooperate in a strong army-to-army cooperation where the president has agreed to send his chief of staff quickly to Addis Ababa and they will agree on the common cooperation of making our borders and also inland secure,” the Ethiopian premier is quoted to have said during a joint press conference with Salva Kiir.

Ethiopia's PM: “Peace is very important for #SouthSudan and the region, everybody must work for peace & guns must fall silent! unmissmedia

His statement is in apparent reference to not entertaining rebel groups in the opposition who have been asked to mount an armed resistance against the South Sudan government.

Former first vice-president, Riek Machar has called for an armed resistance after he fled the country following renewed clashes with forces loyal to President Kiir. He is currently in South Africa seeking medical attention.

Attacks on the country’s highways and on the civilian population has been laid at the doorstep of rebels. The latest is the abduction of 30 school children even though they deny any involvement.

For his part, Salva Kiir said, “We have discussed very important issues and especially the bilateral issues and we have signed several MoUs and these are things to be implemented.

We have agreed on security issues that we will not allow any negative force to use our territory to launch hostile activities on the other.”

Hailemariam is one of the guarantors of the peace deal signed last year and his former foreign minister Seyoum Mesfin was the chief mediator of the deal that allowed former South Sudan first vice-president to return to the capital this year.