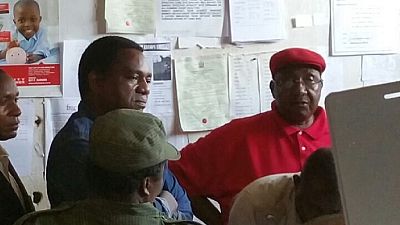 Zambia’s opposition leader, Hakainde Hichilema says he has been denied basic necessities of food and water that were brought to him by his legal team.

Hichelima and his deputy Geoffrey Mwamba were arrested by police on Tuesday on suspicion of sedition. Both men are expected to appear in court on Thursday.

In a facebook post hours after his arrest on Wednesday, the United Party for National Development (UPND) leader said; ‘‘Vice-President GBM and myself would like to express our gratitude to all our supporters and sympathisers for standing with us and encouraging us to remain strong.

‘‘We have so far been denied food, water and our own beddings and warm clothing being brought by our legal team,’‘ he added.

His post also added pictures of supporters of the UPND who had been arrested by police and others who were been assaulted. Party members thronged the police station where they are being held.

He also made a call for supporters to ‘‘remain strong as you join the struggle for the defence of our democracy.’‘ He said the leading opposition party had now become a movement aimed at liberating the citizens.

‘‘As we have been saying, UPND is now no longer just a political party but a freedom movement aimed at liberating the people of Zambia.’‘

Hichelima and the UPND lost the August 11 polls in which incumbent Edgar Lungu was declared a first round winner with 50.35% of the vote. Hichelima according to the Electoral Commission of Zambia (ECZ) got 47.6% of the votes

The opposition UPND went to court with a petition challenging Lungu’s reelection. According to them, the elections were rigged by the ruling party in collusion with the ECZ.

We present a time line of the court appearances which comprised two parts, the petition and subsequent application to halt the swearing in of the incumbent.

Lungu was subsequently sworn in and has already named a cabinet.