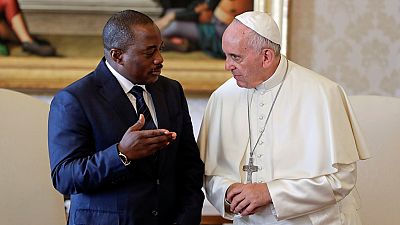 Pope Francis II on Monday met with president of the Democratic Republic of Congo (DRC), Joseph Kabila at the Vatican during a private audience.

‘‘Particular attention was paid to the serious challenges posed by the current political situation and the recent clashes that occured in the capital,’‘ a statement from the Vatican said.

The Vatican statement reiterated the need for different political actors and civil society groups to ensure that a peaceful dialogue is used to achieve stability and peace in the country.

The meeting also touched on the need to restore civil coexistence to the country’s east, which has been plagued by rebel attacks in the recent past. The increased contribution of the Catholic Church in the areas of education, health and poverty reduction was also discussed.

The Congolese capital, Kinshasa, was rocked by deadly violence after the opposition called for protests a week ago against the failure of government to fix an election date as Kabila’s mandate expires later this year.

A political dialogue led by former Togolese prime minister, Edem Kodjo, has been scuttled following the violence. The Catholic Church, a key player in the dialogue suspended their participation in the process to mourn those killed in the September 19 clashes.

The government’s casualty figure of 17 has been challenged with human rights activists quoting 37. The opposition parties however assert that over 100 people were killed in the crackdown.

The opposition have declared three days of national mourning and have also dragged some government officials to court over the the killing of protesters during last week’s demonstration.

Led by the veteran politician Etienne Tshisekedi of the Union for Democracy and Social Progress (UDPS), the opposition coalition is seeking redress from the court for the victims of the September 19 and 20 violence that claimed the lives of dozens of people.

Reactions have increased across the world since the start of violence with the United States and the European Union threatening sanctions against Congolese authorities. The UN however demanded all stakeholders to exercise more restraint for the safety of civilians.